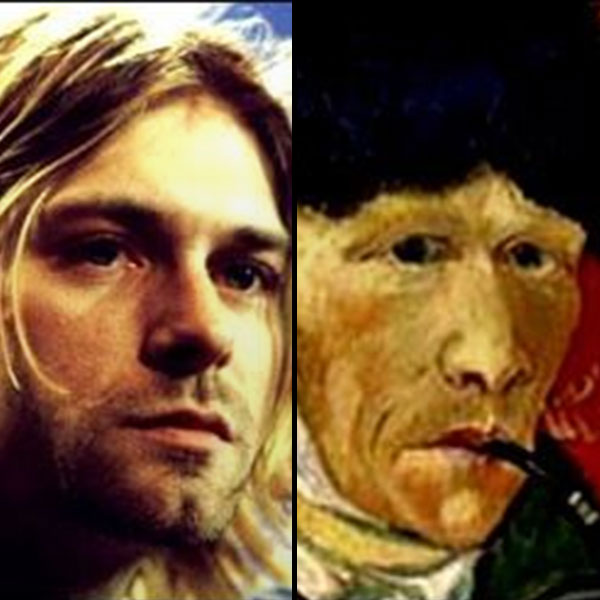 This month marks the 20th anniversary of Kurt Cobain’s death, and while countless articles are rehashing the same old themes, I want too float an idea out into the world that has been on my mind for…well, for 20 years.

First, I should say on a personal note that while I can count one or two Seattle musicians from the grunge era as friends, I never actually met Kurt Cobain. I blew off a friend’s show once, not knowing until later that it would have been my one chance to hang out backstage with Kurt.

I do feel some personal connection to his loss, through friends who knew him and talked about their own personal memories after he died.

This isn’t about my personal feelings, though.

I want to put Kurt Cobain into some sort of historical perspective.

To me, Kurt Cobain was the late 20th Century’s musical Vincent Van Gogh.

Both were brilliant, troubled artists. Both probably suffered from some form of diagnosable mental illness.

Both were part of artistic ‘movements’ that caused them to be in conflict with the ‘establishment.’

Both even suffered from severe PHYSICAL problems that contributed to their downward spirals (Van Gogh’s ringing ear, Cobain’s aching stomach).

Van Gogh came up as a painter among France’s ‘impressionist’ movement in the late 1800’s.

More than 100 years later the impressionists (Monet, Manet, Renoir) seem tame, but at the time they were revolutionary. they purposely broke all the establishment rules of painting. You could see their brush strokes. They painted sunlight informally as it really looked during different times of the day. They rejected posed mannerisms for candid movement.

They were the art world’s punks.

Among this group, Van Gogh was an extremely volatile, insanely talented presence.

The comparison between the rebellious Impressionist movement and the 80’s punk rock movement – which evolved into the 90’s grunge era – doesn’t seem too far of a stretch to me. It’s not a perfect comparison, but it’s a reasonable one.

Cobain also had a volatile, but insanely talented presence in his movement.

Both Van Gogh and Cobain expressed their anguish, their volatility, their compassion, and their internal conflicts honestly and daringly.

Both suffered downward spirals that resulted in tragedy.

Both remain losses that are hard to explain.

Everyone who writes about Cobain tries to find adequate words to make sense of his too-short life.

I feel those words are not too difficult to find. They are simply: