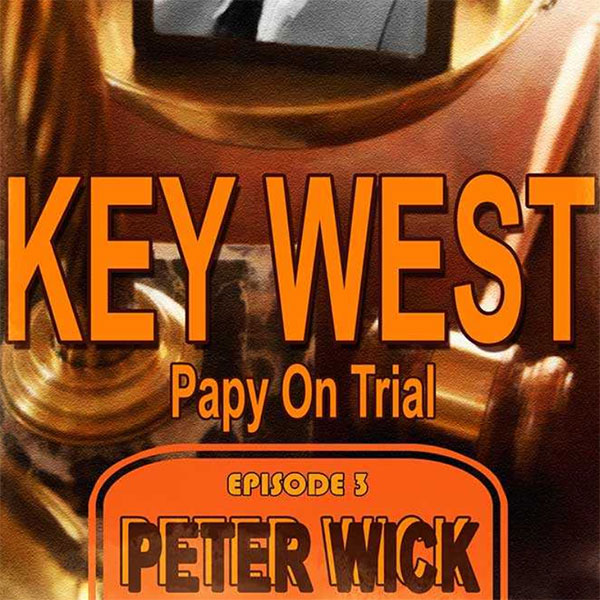 Note: Key West – the novel; Key West episode One; “One-way Ticket,” and Key West episode Two; “Cooking The Books” are all available from Wheelman Press. Coming soon will be Episode Three; “Papy On Trial.” The following is a sneak peek

“Fine, fine. Sit down, everyone. Jesus!” McCarthur plopped heavily into his own chair and looked out at the room. “Well, Christ Almighty,” he said. “The whole damn state of Florida here?”

A stony silence greeted McCarthur from the packed room.

McCarthur looked from one side of the room to the other. Every seat was filled.

The small overhead balcony was also packed. Court room B4 had seldom known so many people.

McCarthur turned to his left, to the defendant’s table, looked first at Belmont, then moved on to Davis. Finally McCarthur looked directly at Papy.

“Representative Papy,” McCarthur said, “You’re entertainment. We should move this trial to the Gators football stadium and sell tickets.”

Papy lifted his head as if to respond, but McCarthur put a hand up.”

“For chris’sake don’t talk now. It wouldn’t be appropriate. Bailiff, let’s get this dog and pony show under way.”

The bailiff rose with a piece of paper in his hands.

Papy, sitting stiffly between Davis and Belmont, stared blankly at the floor in front of the defendant’s table. His ears tuned out the bailiff as the charges against him were read aloud. All Papy heard was the sound of dozens of pens scratching across notepad paper behind him.
This sound grew in his consciousness. every pen scraping across paper, noting these charges, to be printed in newspapers the following morning, scraping, scraping, louder and louder, until he turned around suddenly, and his eyes met those of Pat Murphy three rows back.

An elbow struck Papy in the ribs. Papy looked down with a start. Davis was whispering.

Davis was looking at him with a note of concern.

“Let the record show that the defendant pleads not guilty,” McCarthur barked. “Thank God for that. Otherwise we wouldn’t have any fun.”